Individual handwriting is an expression of our ever-changing human experiences, from pre- teen identity crises through changes into our senior years. Frames of mind or moods affect each drawn word and actual letter every time we pick up the pen.  My life changed once I was aware of the Vimala Alphabet. I wanted to have my handwriting reflect the positive qualities of each of her letters; I was not interested in what my current (at the time) handwriting said about me.  Analyzing handwriting paled, in my estimation, compared to what lay ahead as I learned how to draw each fascinating letter.  My past negative handwriting was just that:  “my past”.  I was off on a new and exciting adventure.

Much has been written regarding “analyzing” handwriting, but the early 1990s brought with it a new approach to looking at handwriting; the introduction of the “Vimala Alphabet!” Goodbye Palmer Method with its restricting and sabotaging backward swirls and loops.  Dr. Vimala Rodgers had vision: an alphabet where each letter was a powerful tool to enhance life through letters that were clear and clean (both script and printed). This new alphabet encouraged the writer to change the actual shape of how we were presenting standard alphabets, thus perhaps opening up oneself to a brighter future. 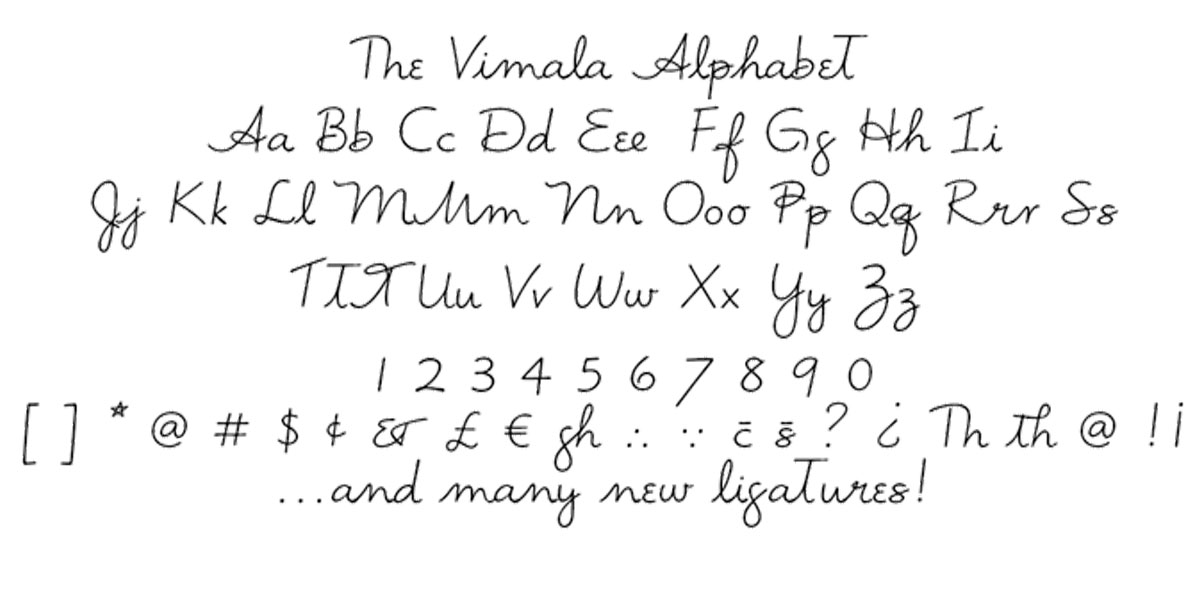 Indeed, we were summoned to possibly discover unknown or buried skills and talents by learning to draw the alphabet in a new way.

Books also abound describing character traits that letters shaped a certain way can tell us about our personal behavior. It is good to look at our handwriting from many perspectives and go forward with practicing an alphabet in a way that makes the most sense at the time for us.  The Vimala Alphabet made perfect sense to me.

I call you to take a look at my blog from time to time as I explain how the Vimala Alphabet has influenced my life for the last fifteen years.